The Vietnamese art scene has many painters not only well known in the country but also famous throughout the world. Below is the information about the eight most famous Vietnamese artists offering the readers an insight into the Vietnamese painting.

Vietnam’s most famous painter Nguyen Gia Tri (1908 – 1993) was one of the pioneers who created a new artistic trend for Vietnamese painting. He graduated from the Indochina Fine Arts College in 1936 and is considered “the father of modern lacquer paintings in Viet Nam”. He was also a cartoonist of political and social issues.
Artistic style: He combined the printed engraving with the new lacquer methods. Moreover, he also applied the principles of Western painting to create modern painting but still retained the ethnic characteristic.
Famous paintings: Girls in the garden; The spring garden of North, Central and South; Young lady by confederate rose. 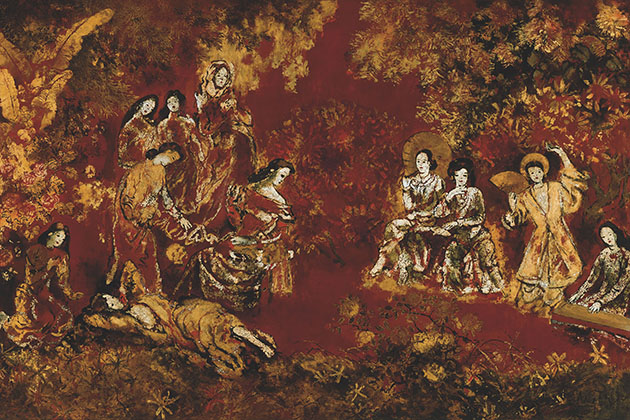 To Ngoc Van is the pride of Vietnamese painting, he was also named for a street in Ha Noi and in Ho Chi Minh city. He contributed to Vietnamese art with his unique works of international stature. The masterpiece “Young girl by lilies” was created by To Ngoc Van in 1943 when he was teaching at Indochina Fine Arts College. The picture depicts a young woman in ao dai tilting her head gracefully toward the vase of white lilies. This is considered the most typical painting in the career of To Ngoc Van as well as Vietnamese art in the early 20th century.
Artistic style: To Ngoc Van succeeded in using oil paint material in Vietnam. He tried to express the charming beauty of the contemporary Vietnamese, especially through the portrait of young women.
Famous paintings: Young girl by lilies, Young girl by lotus, Two young girls and a baby. 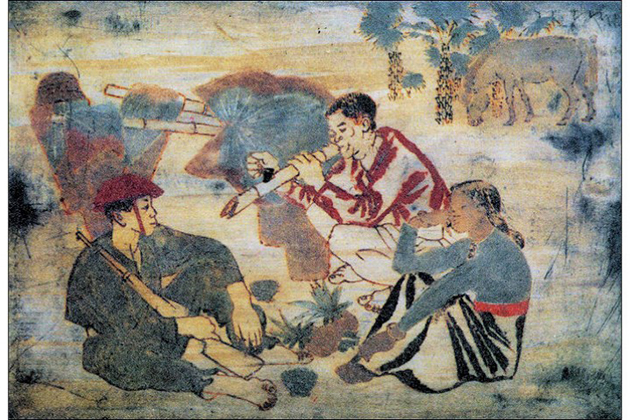 He was one of the “Four Masters” of Vietnamese Modern Art, along with Nguyen Gia Tri, To Ngoc Van, Tran Van Can. After graduation from Indochina Fine Arts College, he opened his own studio in Ha Noi. He is considered one of the few contemporary artists capable of bringing pure colors into a fictitious, symbolic and gracious harmony, even with silk painting. From the 1940s, with the liberal rhythm of his strokes, Nguyen Tuong Lan soon broke the rule to pursue abstract art.
Artistic style: Mastering most of the oil painting, lacquer, silk, wood carving, pastel, charcoal,…
Outstanding works: Mountainous market; Friends 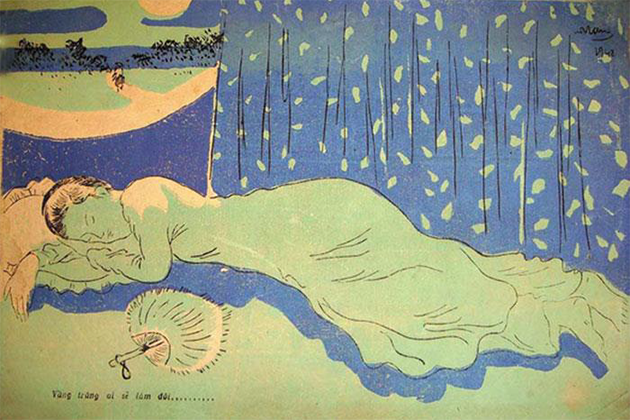 Being the fourth in the list of “Four Masters” of Vietnamese painting, Tran Van Can contribute to the art of the country typical works with high artistic value and rich in humanity. He served as the General Secretary of Vietnamese Fine Arts Association. He was a great contributor to the movement and direction of Vietnamese Art. “Little Sister Thuy” is an oil painting composed by Tran Van Can in 1944. It can be said that it is the pinnacle of art in the career of Tran Van Can and also Vietnamese art. With a genuine and gentle expression, he left the impression on viewers with the innocent beauty of the little sitter.
Artistic style: He was one of the few artists who has experimented on a variety of materials and genres. He also turned lacquer into a famous painting material which brings the artistry of Vietnamese painting.
Famous paintings: Little sister Thuy; Irrigation; Washing the hair. 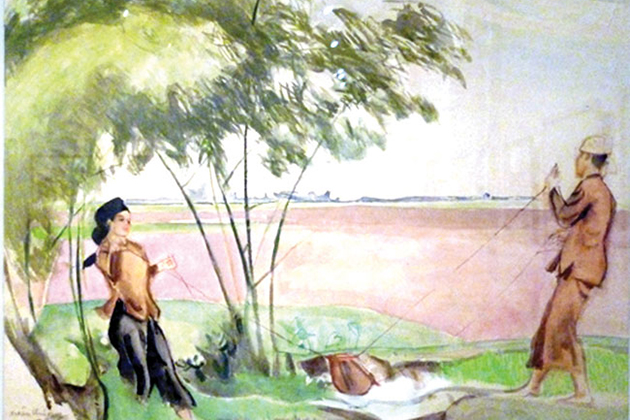 He is the last Vietnamese painter in the quartet “Phai, Sang, Lien, Nghiem”. He was awarded the Ho Chi Minh Prize for fine art in 1996. He was also one of the few artists who had his own museum. The art critic at that time assumed that paintings by Nguyen Tu Nghiem have the combination of modern style with traditional thought, thus creating his own identity.
Artistic style: The lines, colors, rhythm are always stylized, based on the pattern of Dong Son bronze drum, Ly Tran pottery, pagoda architecture, traditional dance,…The shaping technique, even modern and stylized, still evoked the national religious beliefs and cultures in Southeast Asia.
Famous paintings: The spring by Hoan Kiem Lake; 12 animals designations; The ancient dance. 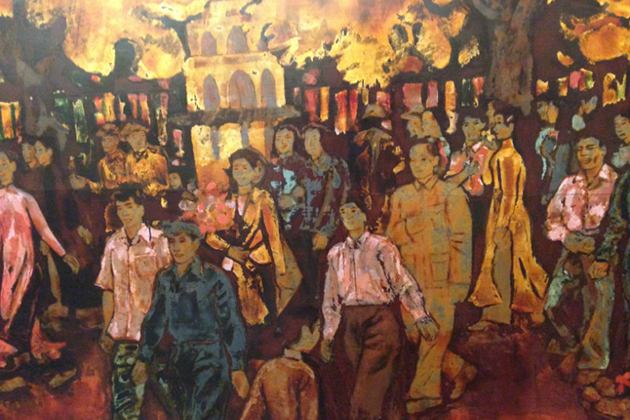 Bui Xuan Phai is the most famous artist in Vietnam with street paintings, especially the ancient town. His paintings are antique but very realistic, genuinely expressing the soul of Hanoi ancient streets in the 50s, 60s, 70s. He used bold borders to the color plaque in his painting, which makes it deeper from the surface to the landscape. Apart from the old town, he also gained success in other topics such as traditional operetta; portrait, rural, nude,… Many artworks by Bui Xuan Phai have been awarded in the capital and national exhibitions.
Artistic style: He specialized in oil painting and the ancient town of Ha Noi.
Famous paintings: Ha Noi ancient town; Hanoi Resistance; Cart in the old town. 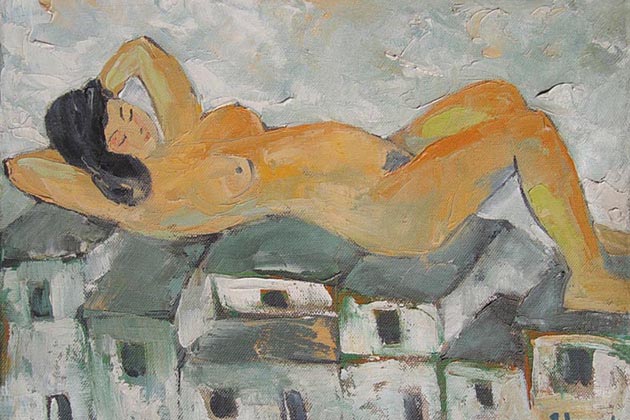 Nguyen Sang is an influential painter of Vietnamese lacquer painting, who had a lot of contributions to contemporary Vietnamese painting. He successfully exploited the style of modern European art, but not far away from folk and traditional Vietnamese art. His style of art is a harmonious combination of modernity and the national essence. He is also the designer of the first postage stamp of Vietnam, released in 1946, showing the portrait of Ho Chi Minh. He was awarded the Ho Chi Minh prize.
Artistic style: Nguyen Sang used his drawings to serve the national resistance. In addition, he also drew on a variety of topics, such as women, flowers, temple scenery, rural scenery,…
Famous paintings: Party admission in Dien Bien Phu.

He was one of the four pillars of Vietnamese painting. Duong Bich Lien didn’t compose much, only about 79 artworks throughout his life. He was a self-contained person. However, hidden behind this solitary appearance is an intense interior, who always yearn to find the beauty of the painting.
Artistic style: He can draw on many materials, especially oil, lacquer and charcoal. He was particularly successful with works on female portraits.
Famous paintings: Uncle Ho in Viet Bac, Miss Mai. 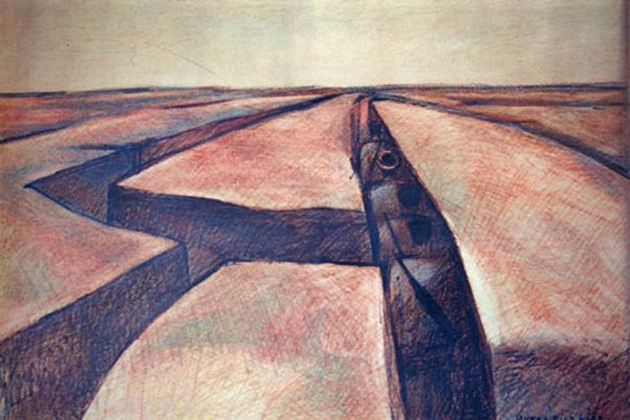 One thought on “Top 8 Most Influential Painters in Vietnam”